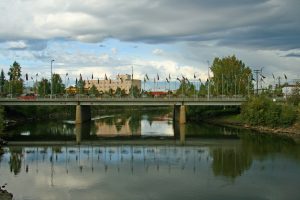 The City of Fairbanks was founded in 1901 by E.T Barnette. The discovery of gold near Barnette’s trading post prompted him to turn what was a temporary stop into a permanent destination. In November 1903, Barnette became the city’s first mayor while the city flourished as thousands of people flocked to the area during the Fairbanks Gold Rush.

By the time of World War I, the once easy-to-reach gold mine plunged and miners moved elsewhere, leaving Fairbanks a ghost town. Construction of the Alaska Railroad began and caused a peak in economic activity. The railroad allowed for heavy equipment to be brought in for further exploitation of Fairbanks’ gold deposits. About the time of the Alaska Railroad’s completion and the beginning of the dredging era in Fairbanks, Alaska’s aviation industry began to take off. The first airplane flight in Alaska took place in Fairbanks on July 4, 1913. Enormous gold dredges were built north of Fairbanks, and the city grew throughout the 1930s as the price of gold rose during the Great Depression. A further boom came in the 1940s through the 1950s as the city became a staging area for the construction of military depots during World War II and the first decade of the Cold War.

On March 12, 1968, an Atlantic Richfield drilling crew hit oil near Prudhoe Bay, 400 miles north of Fairbanks. The discovery of oil sparked a massive boom in Fairbanks, the nearest city. Pipeline construction ended in 1977, beginning a gradual decline in Fairbanks’ economy. Oil prices and the regrowth of gold mining rose in the 1990s, improving the City of Fairbanks.

With such a rich history, visitors can take a step back in time by visiting a variety of historical landmarks.  At Gold Dredge 8, strike it rich in the National Historic District, serving as a monument to the hard-working miners who built Fairbanks. The Trans-Alaska Pipeline Viewpoint is where 70,000 construction workers and $8 billion built the famous 4-foot silver thread snaking its way through 800 miles of the Alaskan wilderness where every hour more than a million dollars of black gold flows. The Pioneer Air Museum allows tourists to learn about the preservation of Interior Alaska’s aviation heritage.

Bridgewater Hotel was built in 1974 on the same grounds once belonging to The Pioneer Hotel. Located on First Avenue, it was one of the landmarks of early Fairbanks.

Fairbanks has grown to become the second-largest city in Alaska and the largest city in the Interior region. It’s become a popular year-round destination for guests across the country and abroad. With the midnight sun and aurora borealis, quality attractions, robust activities, and rich history, Fairbanks, Alaska is the perfect vacation destination on your Alaskan getaway.